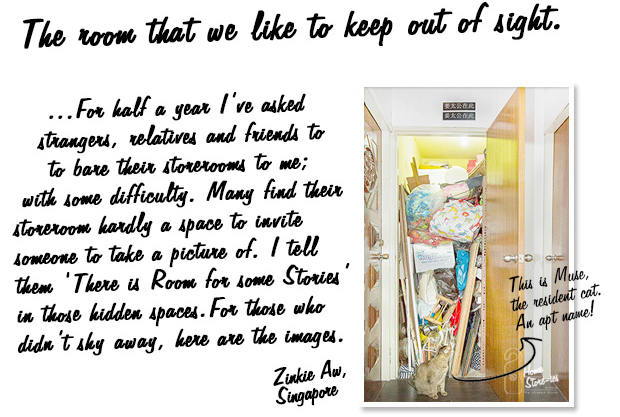 The room that we like to keep out of sight. The Singapore Storerooms.

Storerooms are never in the limelight. They tend to be unseen and hidden spaces within homes, locked or behind closed doors. Yet, storerooms intrigue me. As the famous slogan of the 7-Eleven convenience store goes — ‘It’s a Store and More’ — I thought the same goes for the storerooms in urban homes.

Some storerooms shed light on a global issue like city-living — partly a microcosm of what it means to live in one of the world’s top 5 most densely-populated countries, Singapore, where land is scarce and majority of the population live in high-rise apartments.

On a national level, storerooms could be a metaphor for the predicament of a trend towards a consumption culture, a so-called ‘first-world problem’ that manifest in urban cultures: An appetite for a society to consume and hold on to more than it needs.

Lastly, through the articles and objects left in the storerooms, we get a glimpse of the inhabitant(s) of a particular home, who would utilise(s) excess storage space in various ways.

I often wonder why guests or even extended family members are often forbidden to see or enter storerooms in the Asian culture, for instance during the Chinese New Year. Why are storerooms associated with being a disgraceful sight?

Through an experimentation to ask strangers, friends and relatives to let me photograph the room that is often unspoken of in their homes, there were many curious questions as to why I chose to photograph a ‘taboo’ space.

It is hoped that through these slice-of-life photographs of ‘anonymous’ storerooms in Singapore homes, one can put in the limelight, inspect and and reconsider the meaning of this ‘alternate space’ that we take for granted in our urban homes.

Storerooms manifest themselves in many skins — a formal ‘Storage Room’ as stipulated by Singapore’s Housing Development Board in high-rise flats; a ‘Household Shelter’ (aka. ‘Bomb Shelter’) required in new dwelling units built since 1998; an attic of a house, or simply a modified, ‘multi-purpose’ empty space somewhere within the parameters of a home.

Some owners shared stories on why certain articles were kept away in these spaces. Others re-discovered pre-loved objects from within the storerooms.

Finally, to de-mythify the conventional wisdom: Not all storerooms are synonymous with being ‘messy’ or unglamourous!

Zinkie Aw, 2014 (Singapore)
Thanks to all who opened up their homes to me, it wasn’t as bad as it seemed to show me the hidden room right!

This series has been featured on:
Culturepush
Invisible Photographer Asia